You must login to complete a purchase on this site. Logging in also ensures you will receive the best pricing, special offers, and easy checkout. 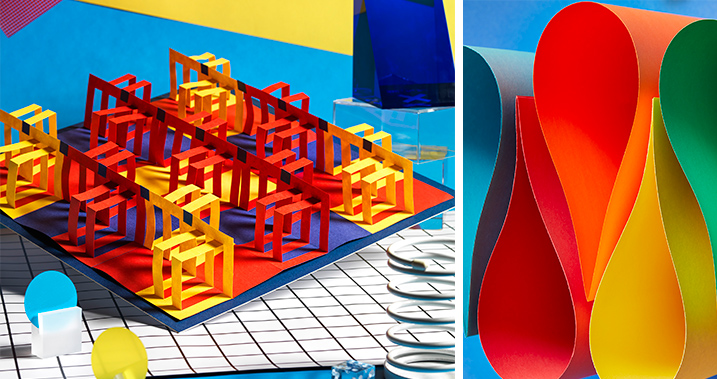 A Pop-Up is described as a self-erecting, three-dimensional structure formed by the action of opening a crease. The most common forms of pop-ups found today are mostly in greeting cards and children’s books. This lesson will use construction paper to turn a flat 2-dimensional sheet of paper into a three dimensional structure by folding, cutting, gluing and inserting the pop-up structure into an accordion fold strip. In addition, explore the work of famous paper engineers and pop-up artists such as Robert Sabuda, Matthew Reinhart, and Ron van der Meer.

Students should construct a practice pop-up prior to starting the final construction of their finished pop-up. This will familiarize the student with the folding and cutting processes and will help them work out any problems they may have in completing their finished work. The practice paper should be similar in weight to the paper used for the final piece.

NOTE: The 5” x 15” backing strip is a design choice that allows a portion of the pop-up to protrude from inside when folded. If you would like the pop-up to be fully concealed within its closed borders you will need a longer strip.

Mark pieces of color A and color B at 5”. Join Color B to A at the 5” mark and Color C to B at the 5” mark. There will be a fold line directly to the left of where the colors are joined.

Using the smallest ball burnisher from the Proedge tool set, line a ruler up with the top and bottom marks and score a line from top to bottom.

Fold back and forth along the scored marks and set creases with the bone folder.

Set aside and complete the pop-up structure pieces.

Measure 2-1/2” in from one edge of the square. Mark both the top and bottom.

Use a ruler and the smallest ball burnisher from the Proedge tool set to score a line.

Fold the right half against the ruler and towards the other edge. Set the crease with the bone folder.

Open the fold. Each half measures 2-1/2” x 5”. Measure down on the right side 2-1/2” and place a light mark on the crease. Also place a mark on the outer edge of the right side. Draw a line connecting both marks. Using a knife or scissors cut along the line to the center crease. (See Fig. 3)

You now have two flaps on the right side of the center fold. Turn the top flap towards the center crease. Turn the bottom flap to the back and bottom of the left side.

Place the top flap facing up with the folded edge to the right. Measure ½” in from the left side of the flap, draw a light line ½” from the top and bottom of the flap.

Measure down ½” from the top of the flap, draw a line beginning at the left side line to the folded edge. (See Fig. 4)

Draw 3 more lines 1⁄2” apart, beginning at the left side line and ending at the fold. You should have 4 lines equally spaced 1⁄2” apart from top to bottom of the flap and 1⁄2” away from the left edge. Flip over and repeat on bottom flap. Make sure the fold line is on the right. (See Fig. 5)

Place the ruler on the line opposite the folded end and press the 3 center sections against the ruler. Remove the ruler and crease the three middle sections flat, unfold them and turn the strip over

and fold the center sections the opposite direction so they are flat against the open-end line. Unfold so the flap is totally flat. Turn over a repeat on the other flap.

After all sections are cut and folded in both directions, open one flap. Pull the second and third section up. Turn over and repeat with second flap. You should now have a rib facing straight up in the center, with one Pop-Up section on the top right and one section on the bottom left.

Join Pop-Up to Accordion Base

Open accordion fold, so that 3 valley folds face up.

Close the pop-up section flat against its center rib.